In Germany, 63,000 vehicles with purely electric drive were newly registered in 2019, more than ever before. This also increases the probability of accidents involving electric vehicles. Unlike cars with combustion engines, electric cars present a new challenge for firefighters in the event of an accident involving battery fire. In the past, there have been reports of repeated fires in electric cars and protracted battery fire-fighting operations that make firefighters' work more difficult.

Why does a lithium-ion battery burn?

The specific energy of lithium-ion accumulators is about 150 Wh/kg and the energy density about 400 Wh/l. This makes lithium-ion accumulators particularly interesting as electrical energy storage devices in the field of mobile applications and allows the construction of small and light accumulators. The self-discharge rate is in the range of 2 % to 8 % per month, the temperature range for use is -20 °C to +60 °C.

Common to all lithium-ion batteries is that the cells are hermetically sealed and can be operated in any position. If lithium-ion cells are now overcharged or exposed to high temperatures (>180 °C), as can occur in an accident, the layer structure of the metal oxides in the battery breaks down – a so-called "thermal runaway" occurs.

During this process, high amounts of energy are released, which form elemental oxygen. The high heat leads to evaporation of the electrolyte liquid, which produces easily combustible gases. If this gas ignites, the lithium-ion cell burns. This is a self-reinforcing process.

So, if such an accumulator burns, it is very difficult to extinguish, because the lithium-ion cells produce the oxygen required for the fire themselves.

Until now, these fires have been extinguished with plenty of water, as the surrounding cells also have to be cooled. The required amount of water can quickly reach several thousand liters.

With our electric extinguishing lance, fires from lithium-ion batteries in electric vehicles can be extinguished quickly and efficiently with a manageable amount of water.

The E-extinguishing lance is inserted into the battery at a suitable point and the fire in the cells is fought directly by the water entering from the lance tip. Therefore only a small penetration depth is required.

The addition of an additive is possible, thereby reducing again the water consumption and reducing the emission of pollutants by encapsulation.

The E-extinguishing lance is made of stainless steel, specially reinforced and insulated up to 1,000 V and is available in two lengths, with extension tube in lengths of 500 mm or 1,000 mm.

Your point if contact for the MURER E-Loeschlanze is 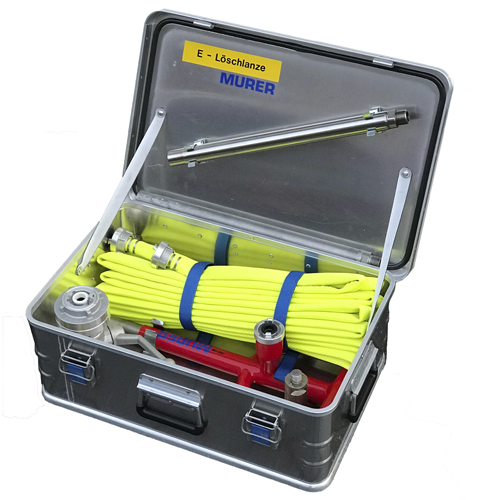 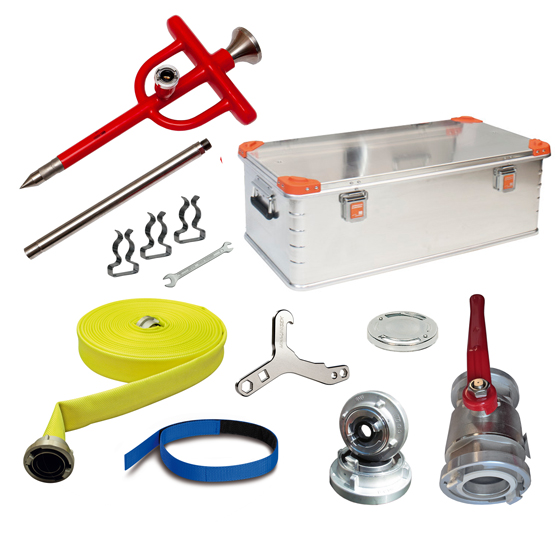 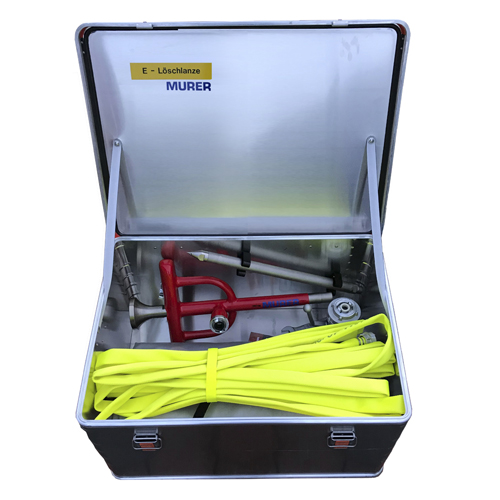 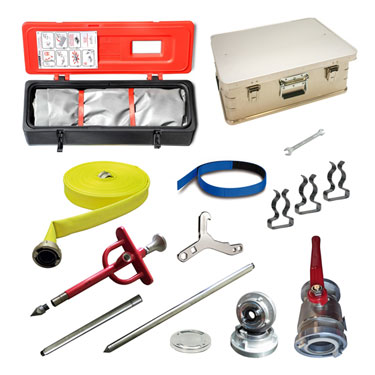 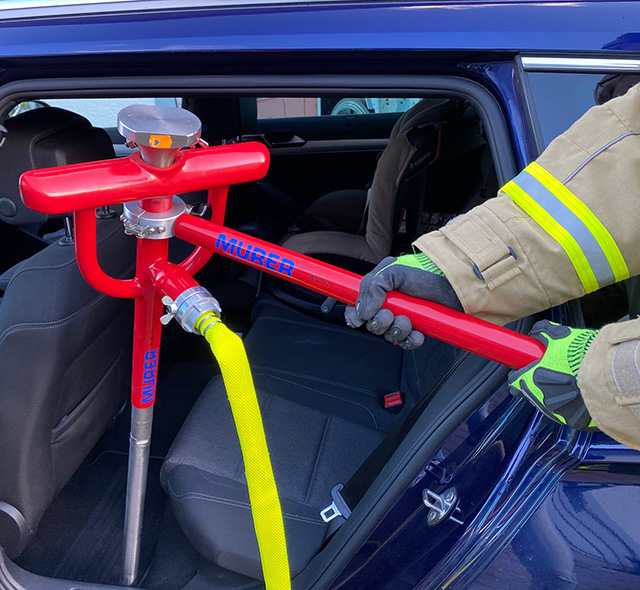 For safe spacing when fixing the e-quenching lance while driving it into the battery. The fixation is done by means of a retaining ring, adjustable with a knurled screw, made of high-strength aluminum alloy. The handle is with cold and impact protection and insulated up to 1,000 V, length 1000 mm, weight approx. 1.8 kg and can be operated in all positions. The E-spacer is divisible for transport and can be stored in the e-extinguishing box. The retaining ring can remain permanently mounted on the E-extinguishing lance for quick use.
>> Art. 163655 Spacer for E-extinguishing lance

How does the MURER E-Loeschlanze lance work?

The vehicle that is on fire is extinguished with water, foam or wetting agent (in compliance with regional regulations). Good extinguishing results have been achieved here with additive F 500. If there are indications of a battery fire, the electric extinguishing lance is used. By inserting the lance tip directly into the battery, a fire can be extinguished quickly and efficiently. The appropriate extension tube is mounted to the E-extinguishing lance depending on the situation and a D-hose is connected to the coupling.

The tip of the lance is brought into position and fixed. Open the hose shut-off before hitting it in. Attention: Always open and close the water shut-off slowly. The water pressure can cause a recoil. 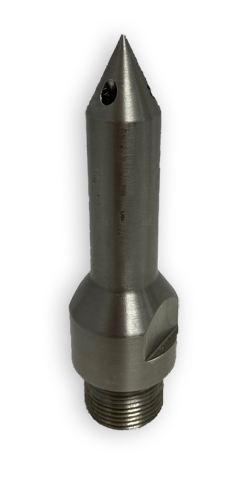 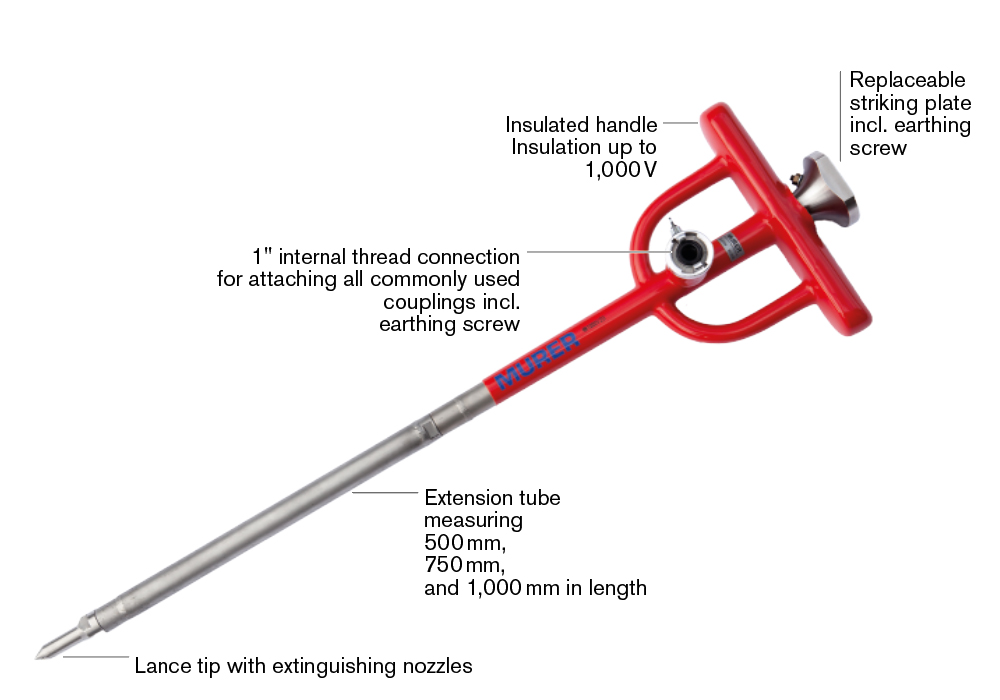